Woke up at 6am this morning and sat outside on the balcony reviewing the route, as useless as that would turn out. A typical chilly and overcast May day but who cares when you have a view like this. 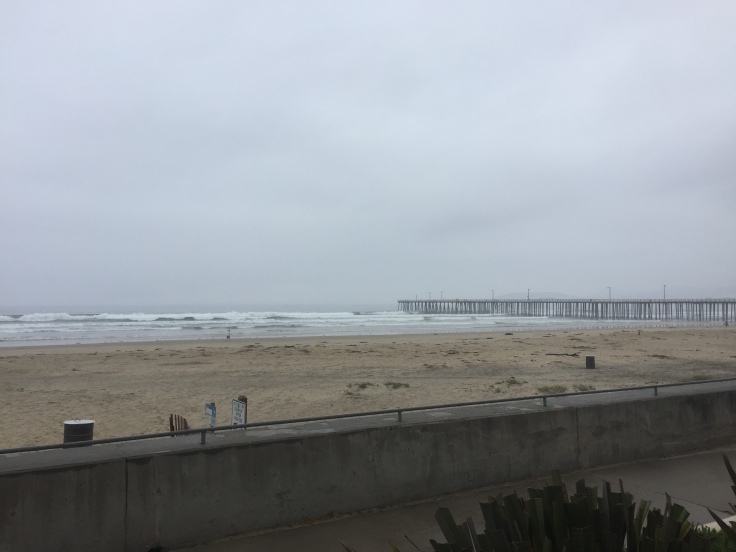 Met up with the parental unit for a leisurely breakfast in the Sandcastle Hotel lobby, judged it to be a 5 layer day and finally set out around 10am. The first couple of miles through Pismo and Oceana can best be described as an endless stream of senior mobile home parks and this cool looking diner. Had I not just eaten I would have been tempted to check it out. 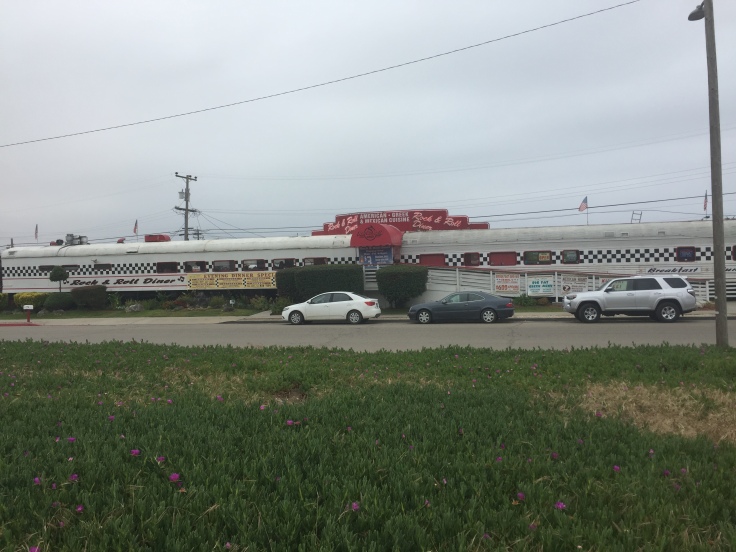 The road takes some twists and turns and soon you’re out in the farmland again, not unlike leaving Santa Cruz. I’m trying to think of some redeeming qualities for the first few miles but nothing springs to mind. After the last few days it was a really easy ride from a terrain perspective but the navigation was a giant pain in the ass. I was truly despising the ACA maps and my Garmin Edge as the day wore on and I liken today to orienteering. You get some waypoints and a compass and go and find whatever happens to be there. I quite enjoyed orienteering as a child but the bicycle version sucks. For those of you not old enough to remember a map and a compass, orienteering was like Pokemon Go without a phone and with a brain. You get a map, some locations and you have to find your way to that location and get your card stamped or pick up a certain part. Cell phone coverage? Didn’t exist at the time. Oh those were the days. Ever time I came across one of these indications that I was on the correct route felt like checking in to a hotel with a laundry and a hot tub, or winning the lottery. My feelings were getting a little confused at this point but let’s just say the feeling was joyous.

Either there are not enough of these (my firm belief) or I was way off course for a fair amount of the day (my suspicion). Take the lovely town of Nipomo, as an example. It’s the first major place you reach and Google Maps took me on a right turn but there was no sign for the bicycle route. Should I have kept going out in to the wilderness and awaited one of these rare signs? I wasn’t brave enough to find out although I will be comparing my route with the ACA route next week to see where I went wrong. I’m not disparaging the ACA maps, many, many people have used them, which is why the suspicion is that it’s me.

My suspicion was later strengthened by a detour that Google Maps took me on around a lovely little neighborhood on the outskirts of Nipomo. I saw the same elderly gentlemen tending to his plants on my left and, shortly after, on my right. I felt I was really being f***** with, geographically speaking.

I turned right at Jocko’s, which looked like a senior care center with the older gentlemen entering it at around noon but as I rounded the corner (after making yet another u-turn) I saw that it was a cocktail bar.

I somehow managed to escape the outer reaches of suburbia, avoided the two Starbucks I saw and made it to Santa Maria. Another navigation snafu took me from a beautiful bike path to an abrupt ending of gravel and an impending crash, narrowly avoided. I did a u-turn, a speciality of today, and found a better road that led to a Starbucks that I could not avoid stopping at.

I met a really interesting guy called Brian who told me more about my model of bicycle than I knew. I know it’s white, carbon fiber and as stiff as hell. He knew much more. he used to race bicycles and was thinking of trying motorcycles and I used to race motorcycles and now enjoy taint-numbing bike rides at leisurely speeds so we soon hit it off. The parental support unit had tracked me down so I had my second S’mores Frappucino before hitting the road at the 25 mile mark – about 1/3 of my planned distance. I had been sitting a while chatting and failed to stretch properly, something that would come back later with a vengeance.

I also saw these at Starbucks and couldn’t figure out if they were just phonetically off or someone had made the wrong things. 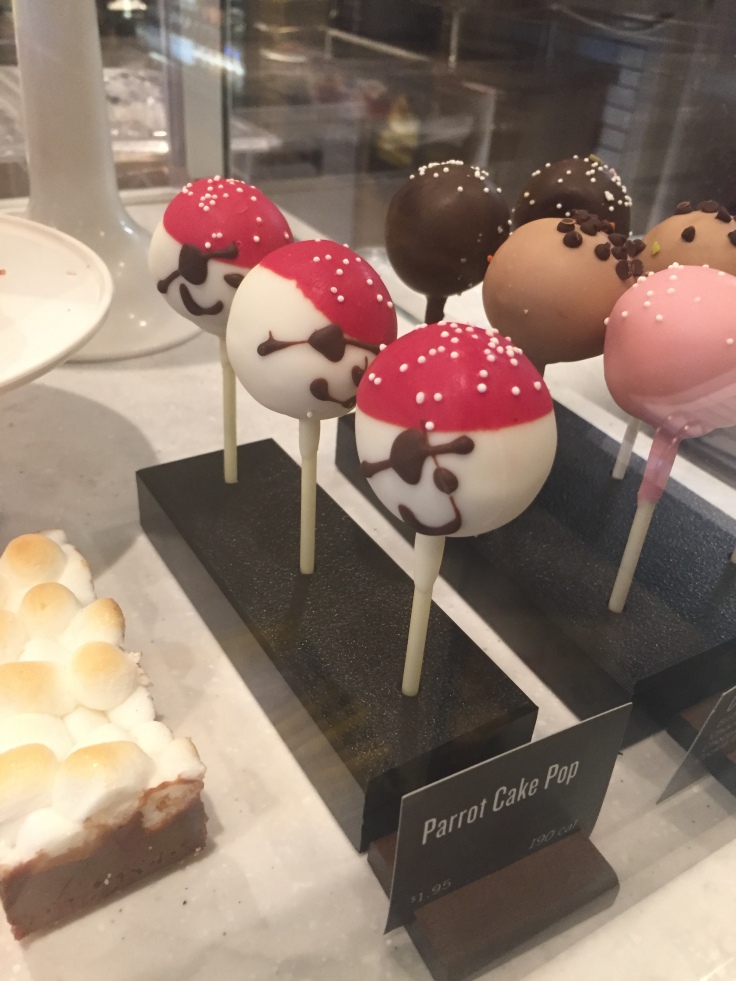 Perhaps that’s how you say “pirate” in these here parts. Arrr….

The navigation from this part got really strange. I seemed to miss another turning and I went from having Santa Maria airport to my left to it being behind me and slightly to my left. It seemed like I was circling London’s Heathrow airport not some little airfield.

I ended up in a little town called Orcutt next. I’d like to say by design, but I would definitely be bending the truth, just a tad. How I got there only Garmin and Strava knows.

It was a quaint little town that seemed geared to be ready for being back to the future but were being held back by some 1800s charm.

It really was quite a quaint place.

The navigation (Google Maps this time) took me parallel to highway 101 for a while and popped me out on the northbound side of the freeway. Only 4 lanes to cross to the safety of the shoulder/bike lane on the other side. Have you tried quickly accelerating from a standing start with clip on shoes? Not easy. Still, I played a lot of Frogger in my early youth so I knew the moves, and the consequences, and somehow made it across.

I cycled along the shoulder for highway 1/101 for a short while and had to decide whether to take the 1 or the 135 to Lompoc. As I chose the and exited I was immediately rewarded by the cycle gods with an uphill stretch as if they were saying “Excellent choice”. In looking at the map now, perhaps not such a great choice.

The views from the top were nice and it was quite a nice slow descent the other side of the hill.

Until I spotted this in the distance……

It was a long, long climb, the first really of the day. It didn’t break my policy of not stopping but it seemed to be pretty endless, right until the end.

There was another descent and then some flat riding to the gate of Vandenburg Air Force Base where you take a left and continue along highway 1. After what seemed like an age I reached Lompoc and realized that I still had 28 miles to go to get to Gaviota, a task that I was really not up to. We were staying in Buellton that night, since there’s bugger all in Gaviota, so I took the left turn and 18 miles to Buellton instead of continuing on with the 28 miles to Gaviota.

The next few miles weren’t too bad and I had just come around a roundabout on the 246 when I completely stopped. No warning, no I’m tired let’s think about this, just a complete stop. 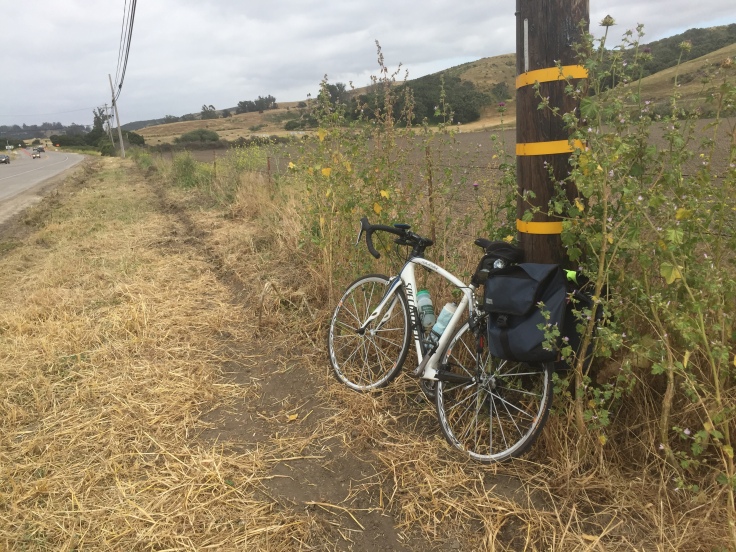 I had just run out of gas, so to speak and couldn’t go any further. I weighed up my options – weeping (couldn’t repeat Sunday), call the support team (would have to deal with this mileage tomorrow) or make camp for the night (toothbrush was in the truck). I just sat by the side of the road wondering WFT had just happened. It had not been a difficult day, almost the opposite. Definitely the easiest cycling day so far. My knees hurt, my legs hurt and my bum, well, let’s not even go there.

I grabbed a gel packet just for something to do and had a little moment.

I had about 14 miles to go to the hotel so the only real choice was to get on with it. With a huge amount of reluctance I got back on the bike after a liberal application of butt’r and started pedaling. The road was not very pleasant with a narrow shoulder where they were doing roadworks but the drivers were very courteous. I somehow got through the first 8 miles and then the pain in my right knee that’s been plaguing me since Pacifica on day 1 told me to stop. 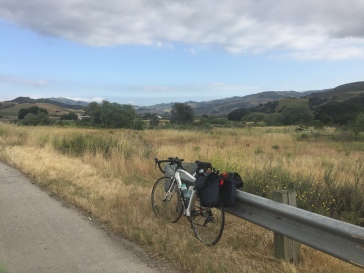 After 10 minutes of ice-pack application I rode like buggery for the last 6 miles or so. There was a hill I vaguely remember and a downhill where I ran alongside a CHP cruiser for while and eventually I arrived in Buellton. The problem with all these hills is that you can’t see the places you’re headed until you arrive at them and this was no exception.

I found the Quality Inn hotel, sorted out the laundry, bathed (and found some previously undetected hideously sunburned calves) and then headed to the local Firestone brewery for some much needed calories. The hotel is nice and conveniently located across from a gas station so I also just enjoyed a whole packet of Grandma’s Lemon Cookies. I’m hoping that Type 2 Diabetes is not in my future.

A very strange day of not overly arduous riding but hitting a complete wall out of nowhere. I assume it’s a build-up of fatigue over the last 6 days.

Tomorrow the goal is Ventura, some 80 miles (sans navigational mishaps) so I’m not sure if that’s going to work given how today ended. Friday may need to be a bit longer than the planned 56 miles but we’ll see how it goes.

2 thoughts on “Day 6, Pismo Beach to Gaviota. Scratch that, make it Buellton.”